Copyright: © 2019 Lucia PV, et al. This is an open-access article distributed under the terms of the Creative Commons Attribution License, which permits unrestricted use, distribution, and reproduction in any medium, provided the original author and source are credited.

This study was designed to assess the sensitivity and specificity of the pathological Q waves as defined in Electrocardiogram (ECG) criteria of European Society Guidelines (ESC) in myocardial scar assessment in patients with prior myocardial infarction. In common clinical practice, Q waves, or QS complexes in the absence of QRS confounders are pathognomonic of prior Myocardial Infarction (MI) in patients with chronic Ischemic Heart Disease (IHD) regardless of symptoms. Prior MI is characterized by the presence of scar. Cardiac Magnetic Resonance (cMRI) Late Gadolinium Enhancement (LGE) is considered the gold standard technique for the detection of myocardial scar. Data was collected on 500 patients referred for a 3 Tesla cMRI viability study. A 12-ECG lead was recorded in each patient. Sensitivity and specificity of wallspecific ECG changes in presence of 2+ or 3+ pathological Q waves in the corresponding wall leads have been evaluated for anterior (V1-V4 leads), inferior (D2, DIII, aVF leads) and lateral (D1, aVL, V5-V6 leads) wall in patients with transmural infarction, defined as >50% LGE. The sensitivity and specificity of wall-specific ECG changes in presence of 2+ pathological Q-waves were 42% and 88% for anterior, 43% and 69.9% for inferior and 28.6% and 76% for lateral wall; in presence of 3+ Q waves they were 24% and 95% for anterior, 27.8% and 82.5% for inferior and 9.5% and 93.8% for lateral wall. This study suggests that Q waves ESC ECG criteria may be a poor marker for detecting myocardial scar in patients with prior MI.

Nowadays the Electrocardiogram represents the easiest medical instrument approach for assessing several heart clinical conditions such as ischemic heart disease. Indeed, the usefulness of the electrocardiogram in clinical practice is well known, due to the fact that ECG is a very simple non-invasive technique, easily available and economic. In common clinical practice, we know that Q waves or QS complexes, in the absence of QRS confounders, are pathognomonic of a prior myocardial infarction in patients with chronic ischemic heart disease regardless of symptoms [1]. Prior myocardial infarction is characterized by the presence of myocardial scar. In the past, studies about the correlation between electrocardiographic abnormalities and the presence of myocardial scar has been severely limited in literature and involved small cohorts of patients. This is because such studies have employed necropsy or angiographic observations as standards of reference against which to assess the properties of the ECG criteria [2-4]. Nevertheless in recent years, these limitations have been largely overcome by the increasing use of advanced imaging techniques such as Cardiac Magnetic Resonance Late Gadolinium Enhancement which rapidly has become the gold-standard technique for in-vivo identification of myocardial scar [5,6]. So inevitably, in the current era of new imaging technique the “Qwave” first described that it [7] is increasingly challenged by the direct visualization of scar using delayed enhancement magnetic resonance.

In literature many studies defend the role of Q-wave, citing its specificity for post-infarct scar [8], ability to localize the site of injury [9], and identify large infarcts among other attributes [10-12]. The aim of this study is to assess the sensitivity and the specificity of the current ECG criteria as described in Third definition of myocardial infarction (ESC Guidelines 2012) in identifying the presence and location of prior MI as detected by cMRI. In particular the sensitivity and specificity of wall-specific ECG changes considering the presence of 2+ or 3+ pathological Q waves in the corresponding wall leads have been evaluated for anterior, inferior and lateral walls in patients with transmural infarction, defined as >50% LGE.

This was a retrospective single-center study consisted of 500 patients (mean age 66.1 ± 14.1 years; 110 females and 390 males) who were referred for a 3 Tesla cMRI for evaluation of myocardial viability and necrosis at our institution. A 12-ECG lead was performed before cMRI scan. cMRI scan were performed in stable patient during hospital admission. Exclusion criteria of the study: claustrophobic patients, presence of cMRI un-safety devices, arrhythmic disorders (atrial fibrillation, frequent supra-ventricular and ventricular ectopies, advanced atrio-ventricular conduction disorders), and severe renal function impairment (patients with eGFR<30 mL/min/kg).

A 12-lead ECG was recorded in each patient enrolled in the study before cMRI scan. Right and posterior leads were not analyzed. Rhythm, heart rate, duration and amplitude of all waves (P, Q, R, S, R’, S’, T) were analyzed manually by two experienced observers. The Q, S, and S’ waves were defined as the first, the second and the third negative deflection between P and T interval. According to this definition, a QS complex was recorded as a single Q wave of period equal to the QS complex in the absence of R-waves, S, R’ and S’. Pathologic Q-waves were defined according to ECG-Q wave’s criteria of the Third Universal definition of myocardial infarction as following:

The presence of 2+ or 3+ pathological Q waves in the corresponding wall leads for anterior, inferior, and lateral walls were analysed: anterior wall explored by V1-V2-V3-V4 leads, inferior wall by D2-D3-aVF and lateral wall by D1-aVL and V5 -V6 leads. 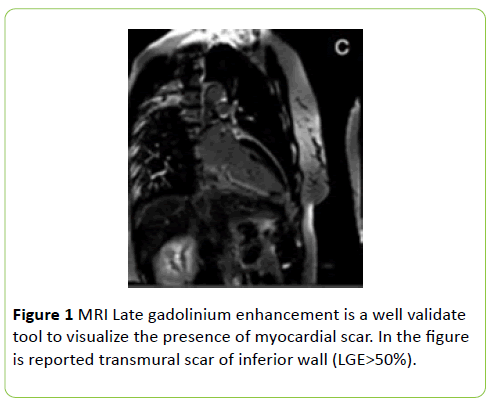 Figure 1: MRI Late gadolinium enhancement is a well validate tool to visualize the presence of myocardial scar. In the figure is reported transmural scar of inferior wall (LGE>50%). 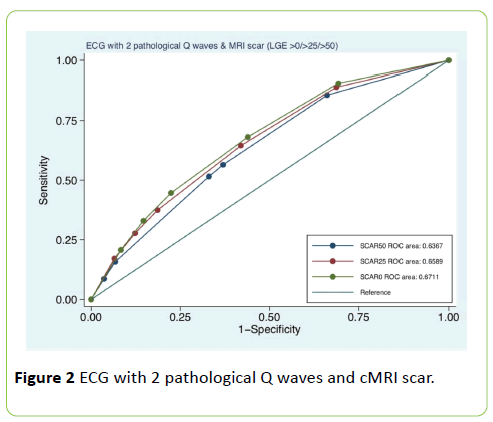 Ischemic heart disease is a major cause of death and disability in developed countries [14]. Although the mortality for this condition has gradually declined over the last decades in western countries, it still causes about one-third of all deaths in people older than 35 years [15,16]. Early diagnosis of ischemic heart disease is crucial, because of the life-threatening consequences of this pathology. The diagnosis is mainly based on some risk stratification approaches, including medical history, physical examination, cardiac serum biomarkers, and instrumental approaches as electrocardiogram. In daily clinical practice the electrocardiogram is uniformly considered one of the first initial cardiovascular testing and an important routine part for the assessment of this category of patients. We know also that invasive approaches, as coronary angiography, is a useful medical tool for detecting patients with suspected CAD, especially in patients with a high pre-test probability of coronary arteries disease, but sometimes characterized by a high risk of procedure complications. On these assumptions, the use of a non-invasive assessment tool for detecting ischemic heart disease has been recently considered largely because offers safety and faster performance, with low risk of adverse effects. So, the electrocardiogram remains undoubtedly a cornerstone in the management of cardiovascular disease, but its value has been challenged in some conditions by newer diagnostic and imaging modalities such as cardiac magnetic resonance and in particularly in diagnosing of prior myocardial injury. In the past years, many studies focused on the predictive value of the ECG in assessing myocardial scar, but characterized by a few number of patients enrolled [8,10].

The study of Asch et al. was a single-centre study of 146 patients referred for CMR for evaluation of myocardial viability and necrosis. Q/QS waves on ECG were defined as per Minnesota Code criteria. Myocardial scar was quantified and localized by CMR delayed contrast hyper-enhancement and assumed as criterion standard. Sensitivity, specificity, and predictive values of ECG were calculated for different scar sizes (>1%, >15%, and >30% of the myocardium) and location (global, anterior, inferior, and lateral walls). In this study the lack of sensitivity and the resulting low negative predictive value of Q/QS criteria seriously limit its accuracy as a marker of prior MI. In a study [8] it was investigated how pathologic Q waves or equivalents predict location, size, and transmural extent of Myocardial Infarction (MI). A group of 79 consecutive patients with a previous first Q-wave MI, documented by clinical records, was studied prospectively by contrast-enhanced MRI and with ECG. Their conclusion was that the location of Q waves in specific ECG leads can reliably predict MI location, size, and transmural extent only in patients with anterior MI and a tall and broad R wave in V1-V2 reflects a lateral (not a posterior) MI. Our study consisted of 500 patients, and in literature is the study with the highest number of patient enrolled. Our study focused on the accuracy of pathological Q-waves in detecting prior myocardial infarction. For this purpose, the current ECG criteria (ESC guidelines 2012) were analysed to assess the presence and location of transmural scar (LGE>50%). CMR LGE is considered the gold standard technique to assess the presence and location of myocardial scar (Figure 1), however have a number of limitations, including high cost, accessibility and a limited number of medical experts trained in. Therefore, the purpose of our study is to validate the use of Q-waves ECG in routine clinical practice in the absence to access to other modalities. In this study we analysed firstly the agreement of pathological Q waves (2+ or 3+ per leads) and the presence of transmural myocardial scar (LGE>50%). The ability of the actual Q-waves ECG criteria in identifying the presence of myocardial scar is poor for the modest value of the ROC curve and for the sensitivity and specificity values (Table 4). Looking at our results, the ECG accuracy in detecting the site of myocardial scar its better in presence of 3+ pathological Q waves per leads instead of 2+. Another interesting result that we can deduce from our analyses is that the ability of Q waves ECG criteria in detecting myocardial scar depends on the site of scar. ROC curve values in presence of 2+ pathological Q waves were: 0.65 for anterior -0.56 inferior, 0.52 lateral wall; sensitivity: 42%, 43%, 28.6% and specificity: 88%, 69.9%, 76% respectively; ROC curve values considering the presence of 3+ pathological Q waves were: 0.59, 0.55, 0.51; sensitivity values for each wall 24.2%, 27.8%, 9.52% and specificity: 95.4%, 82.5%, 93.8% respectively. Looking these results, the ability of the electrocardiogram to discriminate is still modest as we have seen previously in literature. Lastly we considered the ability of the electrocardiogram in detecting myocardial scar considering different amount percentage of LGE (>0%>25%>50%) in CMR. Also in this case, the ability of electrocardiogram to discriminate the presence of myocardial scar is poor with low values of the ROC curves, as showed in Figures 2 and 3. Looking to our results, the ECG is a poor marker to assess prior myocardial injury. In order to improve the ability of the Q-wave to identify myocardial scar, it is necessary to reexamine its pathological basis.

Although Q waves are considered to represent depolarizing current from opposing myocardial walls though “a window” of infarcted tissue [17], studies at autopsy and LGE-CMR now show that scar is rarely homogeneous and often exhibits strands of interspersed viable tissue [18]. The signal-averaged ECG was initially developed to indicate heterogeneous conduction through heterogeneous scar yet, though predictive for arrhythmic events in patients with reduced left ventricular ejection fraction post-MI [19], but its accuracy for determining scar burden is undefined [20]. Das et al. [21] have described the index of fragmented QRS (fQRS), defined as the presence of R’ or notching in the nadir of the S-wave (QRS<120 ms) in 2 contiguous leads corresponding to a major coronary artery territory, which may represent conduction through islands of viable tissue within scar. Recent studies show that the fQRS adds to the predictive value of Q waves for myocardial scar, although the Q-wave has higher specificity and positive predictive value for scar and prior MI than fQRS. Therefore this is a potentially exciting area for future work.